I know that's what you are asking and yes, I've been very neglectful, but recently, I've had to step up, finish the cargo hold, and shoot it because, frankly, I need the room to build a new miniature (or two...).

So, I threw together some props (including a couple of discarded miniature palettes from Mike Deak, and an ancient Grecian head sculpt by Javier). The barrels were banks, and one was a construction made from apple sauce containers - 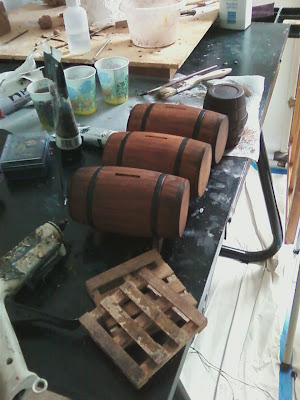 Basically, I threw the entire thing together in an afternoon and shot as many lighting set ups and angles and I could think of.

What will I do with it? I really don't know, but if we ever need to visit the cargo hold for any reason, it will just be a day of green screen element shooting.

In any case, as Phantom Harbor moves slowly to 10,000 views world wide, we know that more content is needed and will be coming soon.

Still working on the big Geckoniki puppet head, but hopefully will be finished that in the next couple of weeks.

In any case, the Captain may make an appearance soon, so check back on the site when you can, because he's a sneaky sort of a guy.

I've attached one of the shots of the cargo hold for you to enjoy, and until next time...

I'll see you at the harbor!


Posted by Phantom Harbor at 12:41 PM No comments: