Along with the Summer heat, July brought with it, another birthday video request. As discussed in an earlier blog entry (see Slow Motion Sail), this video was made for Donna Moore, who is running for Town Council in Port Norris, New Jersey.

Donna's husband, animator Steve Moore, wrote the Captain (at TheCaptain@phantomharbor.com) and gave him the particulars of Donna's upcoming election - hoping this could be worked into the greeting.

Never one to disappoint, our ol' Cap'n came through again, not just having the resident Goblin raise a sail with Donna's election logo on it, but also making an "in" joke about her opponent.

Seems that the opponent in question openly referred to his fellow Town Council members as "idiots" on his Facebook page. Doesn't he know that nearly anyone can read those posts?

All in all, everything worked out for Donna's birthday and it has turned out to be one of the most watched birthday videos on our vimeo channel here: www.vimeo.com/channels/phantomharbor
Though you're watching it here instead ;-)

Shannon Shea
Posted by Phantom Harbor at 3:49 PM No comments:

Phantom Harbor and the SDCC

So, needless to say, I've been invited to join many of my friends to attend the San Diego Comic Con. The last time I attended the convention was 2004 (?) when Sandy Collora premiered his BATMAN: DEAD END movie. I had gone in previous years and, yes, had a fairly good time but like Mardi Gras in New Orleans - it has just gotten too big and dangerously out of control for my taste.

When G4 does "live broadcasts" from the convention floor, I know that it is time to stay home. Of course, if there was going to be a PHANTOM HARBOR booth and I was safely in my little cubicle, that might be different, but to be among the costumed rabble being pushed past an Ironman display - well, let's just say I'm sure I would feel my age then.

The San Diego Comic Con is a necessary gathering. It is the closest thing that genre entertainment has to American Idol. It is a direct connection between would-be creators and their public. Would it do me and Phantom Harbor any good to go down there and peddle the show? Of course it would. I, personally, am not equipped to do it. I can barely do Monsterpalooza, which I guarantee is 1/1000th of the turn out and only three days.

It is bittersweet for me. I feel like Chuck Yaeger standing on the tarmac watching my fellow pilots fly off to become astronauts all the time thinking "spam in a can."

But - no regrets! I have things to do: characters to sculpt/complete, storyboards, miniatures to design and build...all in my new art room! Yay!

So for all of you at the Comic Con, I wish you the best! Hope you sell past your quotas, meet your idols, sell your screenplay/comic/novel/art and when it is over I hope you find your way safely home with a little money still left in your wallets/purses.

Shannon Shea
Posted by Phantom Harbor at 11:03 AM No comments:

I forgot to post this yesterday. This is the original video test where you can see how nice the sail moves with a good breeze and shot in slow motion!

So now you can feel my disappointment. Not that I don't like how the message turned out - quite the contrary - It just kills me that it could have been BETTER!

Posted by Phantom Harbor at 10:54 AM No comments: 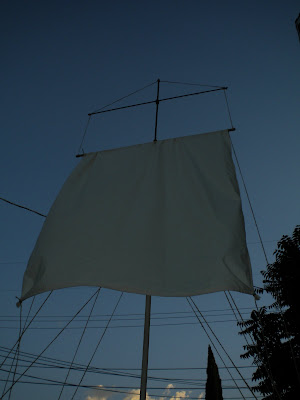 By the time most of you will read this it will be July 15th and Donna Moore, the latest recipient of a Phantom Harbor Birthday Greeting will have watched and re-watched her video enough times to be sick of it. First of all, Happy Birthday Donna! We certainly had a great time making your video.

Because we try to keep certain elements of our videos secret (oh yes - it is SO important what is going on at Phantom Harbor ;-) ) I try not to reveal what we're building so that you won't be caught up in the process but will instead (we hope) just be entertained.

The "big ticket item" this time was a miniature mast and sail. This was something I've been wanting to build for a long time but just never had the opportunity or need. So, with an investment of about $6 I built what you see to the left (as Beyonce would say).

True, my pack rat nature had provided me with plenty of the building blocks: (pvc pipe, muslin fabric, twine, spray paint, etc.) Tracy sewed the sail (which was outside of her comfort zone) and I can't thank her enough. I built the mast with wooden dowels I assembled with hot glue.

On the day it was completed, I shot a really cool test of the wind billowing the sail in slow motion and it really had weight and drama, so you can imagine how excited I was the next day to shoot it for real.

There was a slight breeze coming in from the South/West and in order to shoot the mast free from my suburban location, it was important to elevate it as high as possible and shoot up at it. This was accomplished by setting the piece up on a ladder but because the wind was blowing and the base was 2 feet x 3 feet, I needed something ballast. A weight to counteract the wind.

I grabbed a gallon of paint.

It did exactly what you think it would do. The wind filled the sail and pulled the entire base, with the paint onto the ground. Like a true artist, I grabbed the mast before it hit the ground and got ruined but not before the paint can hit the ground and exploded like a cannon...barely missing my neighbors WHITE JAGUAR CAR!

After a multitude of apologies and my high-powered hose, the driveway where I was shooting was cleaned and the sail was again on the ladder, this time weighted with a 25 pound bag of wet clay, with Tracy and my neighbor watching to make sure it didn't crash down again.

Magic hour (sunset) was approaching and I was trying to get a good shot of the sail when it happened - nothing. No wind. No breeze. Barely a God-fart disturbed the air and I had to shoot. I set up the shot, rolled camera to no avail.

In the grand scheme of things it doesn't matter. The video message stands on its own and in some ways is better because you can read Donna Moore's campaign sign (which was printed and affixed to the sail) clearly. In the future, I will re-film the sail to be used in other episodes (for dramatic effect!)

Alls well that ends well, and I certainly hope that Donna Moore had a great birthday and has great success this November during the Port Norris, New Jersey election!

Shannon Shea
Posted by Phantom Harbor at 11:31 PM No comments:

On Friday, I was visited by John Criswell who revealed his animatronics for our special surprise next episode. What can I say besides, GENIUS!?

With any luck, this character will be finished next week and filming can commence/wrap so we can complete our story for you!

You have no idea how difficult it is NOT sharing the particulars with you. But, I'm thinking that once the show debuts, I'll post some new behind the scenes pictures on my Facebook page.

Before I sign off, I'll bother you again to go to www.vimeo.com/channels/phantomharbor and subscribe. If you love the show, encourage your friends to subscribe! Thanks and...

Shannon
Posted by Phantom Harbor at 12:53 PM No comments: