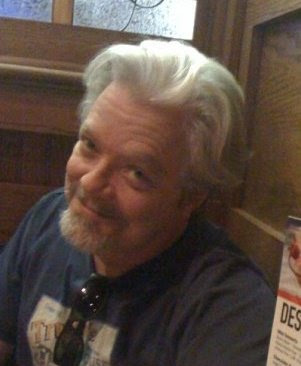 So as some of you may have noticed, Phantom Harbor received a new musical theme. This was thanks to Andy Schoneberg, who is not just a very talented sculptor and make up artist, but turns out to be a talented composer as well.

Andy has worked in Special Effects Make Up for over 20 years and has contributed his incredible talents to films like EDWARD SCISSORHANDS, TERMINATOR 2, INGLORIOUS BASTERDS just to name a few.

Shannon Shea: How did your first get involved with Phantom Harbor?

Andy Schoneberg: I've been wanting to be involved with Phantom Harbor for a long time; it's a cool project. So when I overheard Garrett (Immell) and Kevin (Wasner) talking about your difficulties with YouTube*, I thought to myself, I wonder if I could come up with something.

SS: How did you put it together:

AS: I do a lot of work with GARAGE BAND (music composing program) and I listened to the opening music from your pilot episode to get a feel for what you were looking for.

SS: Did you have any idea that it was the theme from the film THE HAUNTED PALACE?

AS: No, I just listened to it for the different musical cues it contained and then started figuring it out. I began with the violin staccato beat and then composed the violin melody that is picked up by the bass. Once that foundation was done, I added the other instruments then finally the timpani which is kind of like the spice of the piece.

SS: So is the theme composed of "loops" or was it written using individual notes?

AS: I have a little keyboard (USB) that hooks directly into the computer and "jam packs" which are "instruments" that I compose with. I play the guitar, but when I work with GARAGE BAND, I'm more interested in Orchestral Compositions and this was a great opportunity.

SS: You know I love it. Did you have any idea that I would time the gong crash with the blowing out of the match?

AS: No, but it matched perfectly!

Music is such an integral part of any show and to have Andy on board now is an honor and a RELIEF! He hopes to widen his influence by composing more incidental music for the show as well as a theme for our resident Goblin! So what's he sitting around talking to me for?! He's got music to compose!

*BTW - YouTube doesn't take kindly to any filmmaker (profit or nonprofit) using unlicensed music to accompany their films. I made the mistake of attempting to promote the pilot episode on YouTube and nearly had my channel shut down so BEWARE!
Posted by Phantom Harbor at 11:18 AM No comments:

Part 2 gets a Title!

"Rescue from Geckoniki Island" is the working title of the next episode of Phantom Harbor! The action will pick up right where "A Cry From Captain Keller" left off as Captain McAllister lands on the shore of Geckoniki Island.

As for the Geckoniki's and Captain Keller, I'll post some photos as things are made. I don't want to tip the hat too far.

Most of the live action shooting was completed in December 2009 but there are still some key scenes that need to be shot (and written for that matter) but we hope to be up by June.

Those of you who are avid fans will "feel the wait" but I'm desperately trying to increase our viewing base so that by June, we have a nice community all joining the Captain on his journey to this tropical hell!

As usual, I encourage letters to the Captain. Stories, drawings, poems, etc. Send them along with questions to: TheCaptain@phantomharbor.com

Until next time, see you around the Harbor.

Shannon Shea
Posted by Phantom Harbor at 6:11 AM No comments:

A CRY FROM CAPTAIN KELLER

So, as many of you already have seen, A CRY FROM CAPTAIN KELLER was posted on the Phantom Harbor Site, YouTube, and Vimeo simultaneously this Saturday, March 27th.

This episode finally takes the beloved Captain off of the Sofia Maria and transports him to locations exotic. The next episode will more full exploit the island and I'm sure that you won't be disappointed.

Yes, I know there are sound issues but thanks to Tracy Shea, my wife and live action director, we hope to sort those out before the next episode airs in June.

Now, for me, this was the biggest news: The reading of our first "fan written" poem on the show. Lucia Fasano, on her own accord, wrote the short poem at the Fasano Family table at Monsterpalooza last year. Upon receiving it, Tracy and I knew we HAD to do SOMETHING with it other than post her drawing in the gallery.

So, after getting her permission, I set out animating short segments to reflect her tentacled beastie to include it on the show and her father, John, wrote and told me that she LOVED it.
Mission accomplished!

This should be the START of this kind of audience participation. We ENCOURAGE you to send in your photos, drawings, writings, letters, questions, whatever....We want YOU to be as excited as we are to put the show on.

Send your submissions to : TheCaptain@phantomharbor.com - yes, he answers e-mails. Or, if you have a technical question about the show or want to buy a T-Shirt via snail mail, write: info@phantomharbor.com and I'll be sure to get to you ASAP.

Don't despair! Most of the live action for the next show is already shot! Gotta hit the studio to create some new puppets and miniatures and then shoot, shoot, shoot! We're hoping to post in early to Mid-June! You have time! Send your submission in TODAY!

Shannon Shea
Posted by Phantom Harbor at 8:02 AM No comments: 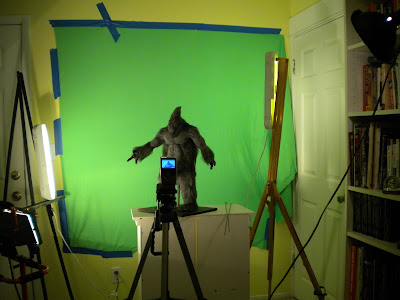 So big news...well, big for us here. Today was the first time we've shot the Goblin puppet on High Definition. We are now shooting on the Kodak Zi-6 (hopefully, the Zi-8 soon!) and getting much cleaner composites because of the higher pixel count!

Let this be a lesson to all of you garage filmmakers. Hi-def is now just $150.00 away! And by the way, check out this incredibly practical home set up! Ridiculous! But anyway, this gets all of us closer to the new episode, so stay tuned!

Until next time, see you at the harbor!

Shannon
Posted by Phantom Harbor at 6:56 PM No comments:

Viewer Poem to be Featured in Next Episode! 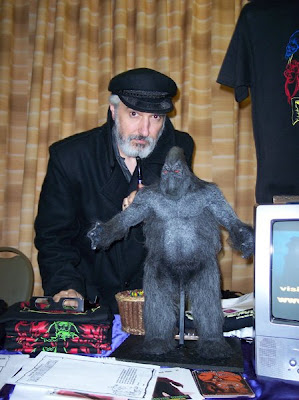 Just wanted to let you know that on the next episode of Phantom Harbor, the Captain will read a short poem submitted by a viewer! Lucia Fasano wrote a short rhyme to accompany the drawing she did on her "Draw Your Own Monster" sheet! She turned it in at MONSTERPALOOZA last year and impressed everyone at the table with her creativity!

Sharpen your pencils, exercise your gray matter and write the Captain to request another "Draw Your Own Monster" sheet or forgo the formalities and just send a drawing and poem in and who knows? Maybe the Captain will read YOUR creation on the show!!! Write him now at: TheCaptain@phantomharbor.com

Until next time, see you at the Harbor!
Shannon Shea

LEGAL CRAP: Submission to Phantom Harbor implies permission for any creations to be posted on the show. No payment will be made for the use of any materials. All rights to the materials remain the property of the creators and Phantom Harbor does not claim or keep any exclusivity to the use of the submissions. Should Phantom Harbor want to purchase a design, musical composition, or written piece, the artist will be contacted so that exclusivity and ownership can be determined and agreed upon by both parties. Let's keep it simple, folks!
Posted by Phantom Harbor at 1:27 PM No comments:

Thanks to our friends at youtube, I have changed the music for the opening titles to an original assembly. Like many of you, I loved the HAUNTED PALACE theme (having animated to it) but seeing that this music is for a very popular* movie and my use of it for a free web series undermines tons of royalties it should be generating, I am complying and discontinuing the use of it.

I'm no musician, sadly, and I don't wish to lean on any of my super-talented musician friends to step up and compose something for me for free - ugh, no way. So, I submit this to you all and await your feedback. If it sucks, so be it - I'll figure something else out before the next episode airs later this month.

Until next time, see you at the Harbor.
Shannon


* I'm being a bit sarcastic. Although I LOVE "The Haunted Palace", I'd dare say that nearly no one under the age of 30 has ever heard of it unless they love Uncle Vinny.
Posted by Phantom Harbor at 9:41 PM No comments: