Again, because I see the numbers and know how many people ACTUALLY check out this blog, I feel safe in previewing the new Phantom Harbor promo postcard: 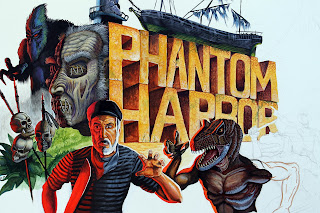 The Goblin posted a video on the Phantom Harbor Facebook page, I'll post it tomorrow in case you missed it!


Posted by Phantom Harbor at 6:16 PM No comments:

Takin' a break from the island...

Just wanted to keep you all updated with what is going on at Phantom Harbor.

I walked around the set yesterday, which was a HUGE mess, and decided to give it a cleaning.  Replaced lights, took stock of what needed to be fixed in preparation for shooting and I noticed that the model of the poor Sofia Maria was damaged!

Time for a face lift!

So I sat down and fixed her all up.  I would have said I made her "ship shape" but she already was! (Don't vomit...it's so unbecoming).  Anyhow, take a look at her now! 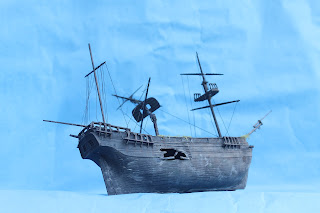 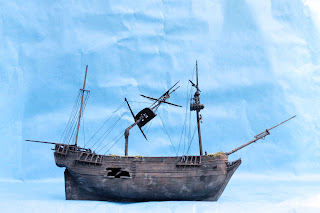 Already shot some new HD footage of her for new establishing shots!  See? Still on track!
With any luck, I'll be going to my daughter, Molly's, studio this evening to clean and put up a large green screen to begin live action shooting!  AND....picking up my Geckoniki hand puppet from the Stan Winston School (who has had it since the Summer IMATS show).

Shannon
Posted by Phantom Harbor at 11:02 AM No comments:

Hey! How'd that Totem work out for you?

So take a look at this video!  The miniature skulls work GREAT!


Now that I've kind of used them in this shot, and there are skulls in a couple of the live action shots, I may not need as many of these as I thought.  You know...less is MORE!

Until next time, I'll see YOU at the Harbor!

Shannon Shea
Posted by Phantom Harbor at 6:52 PM No comments:

Now how can you have head hunters without any skulls on pikes I ask you?!  Well, I've started assembling miniature trophies for those pesky lizard creatures!
Take a look: 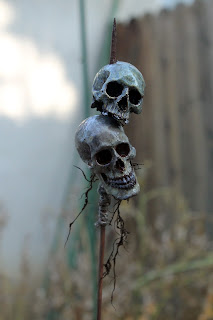 But in order to make it look like this tribe of rapscallions has been at it for a while, I'll have to make a lot more of these!  So what am I sitting here typing this for?  I have skulls to paint, pikes to dress!  Gotta run!


Until next time, I'll see you at the Harbor!

Posted by Phantom Harbor at 5:40 PM No comments:

The Fate of the Geckoniki

Since I'm sure only a handful of you ACTUALLY read this blog, I've decided to share yet another clip from the upcoming show.  Why you may ask?  Because it looks cool - take a look:


Yes, that's the miniature temple with a practical "sky" I created with a smoke machine, a red-gelled light and a piece of velvet.  The explosions were filmed elements that were comped in and the interactive glow on the temple was animated.  Trust me, in higher resolution this looks like I set fire to a real, practical set!  One day.....one day....

P.S. - The "Damnation Alley" look of the sky was purposeful.  I love that movie!
Posted by Phantom Harbor at 5:54 PM No comments:

No...not finished yet, but getting closer:


I like the shadow play on the temple but I think I have to do it artificially rather than use the real wind-blown trees because the scale is all wrong. PLUS, if you look closely, you can see a slight shift in the temple element.  I'm shooting this damn thing on the roof of the garage.  It's tough to lock the camera down up there!

Well, good work today.  Progress, right?
Until next time, I'll see you at the Harbor.

THIS is more what I'm talking about!

I know, I know - just finish the freakin' episode already! Yes, I am - one shot at a time. But, you may recall, that this is THE ONLY place where I post any behind the scenes stuff.  And with that in mind:


See what I mean?  I've filled in with more trees, added some "atmosphere" and made the shot look like it has more scope.  Again, this is a "proof of concept" shot.  The REAL shot elements have not been produced yet!

Working away...Until next time, I'll see you at the Harbor!

Shannon Shea
Posted by Phantom Harbor at 2:14 PM No comments:

Aren't you tired of these Geckoniki Temple tests yet?

Now that I'm back working, I like to reassure you that it hasn't been just for a day or so.  Oh no!  I'm still working on this temple shot which will herald all of the other shots (including the walking INTO the temple shot that I tested oh so many many months ago).

So take a look!  No!  It's not finished yet!  It is a work in progress; there are still a lot of elements I need to squeeze into this shot (including extending the edges of the forest to make it widescreen).  But here is a sketch: 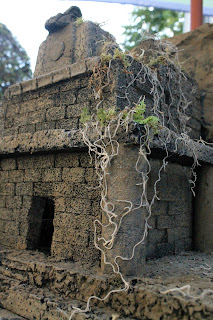 More to come!
Until next time, I'll see you at the Harbor!