So, here we are on another Thanksgiving; it's been a nutty year so far, and with just a few weeks left of 2012 (or a scant month away from the end of the world if you are a Mayan), I guess it is as good a time as any to take a moment and be thankful.

This year has been fairly balanced between good and not-so-good experiences.  As my former employer, Stan Winston would, I think I'll spend less time ruminating over the bad ones and instead focus on the good.

2012 saw the completion of a milestone for Phantom Harbor.  Of course, I'm talking about the "Rescue from Geckoniki Island" episode.  I've already blogged about what an incredible feat this was, seeing how much had to be made and filmed before it could come together the way it did.  But for me, it was more than just the completion of a thought I had proposed two years earlier.  It basically broke down the "imaginary dam" that was preventing Phantom Harbor from moving forward.

True, it would have been great to finish in August, and then move right into a Halloween episode. But, again, this year saw the first episode of "Crafting With the Cap'n" which now establishes Phantom Harbor as a place to check into from time to time, for cool, creepy craft ideas.  I happen to know another one is in the works and with any luck will be posted sometime in late December/early January.

But, without sounding too cliche, I have to recognize how thankful I am to have my family and close friends.  Very few of the people who have known me for years truly understand my relationship with my wife, Tracy.  I think (without being too much of an asshole) what eludes most people is that Tracy and I don't share a traditional American marriage.  We're not traditional American people.  Tracy is not just my wife; she is my best friend in the world.

We talk to each other the way that many people do, outside of their marriages to their best friends.  We share, we laugh, we cry, we experience life together and we try to support each other through our creative endeavors.  We have Molly, who is not just our daughter, but somehow, shares our lunatic lives with us.  We, thankfully, are a small but close-knit family.

I'm thankful that I keep learning; even if it is hard lessons.  I've learned that sometimes, I need to accept help when it is offered and not look upon accepting help as a failure.  I know.  Weird.  But it is true.  I've been lone-wolfing it for so long, I didn't see that I had become rigid and in some ways, selfish.  But I'm changing that.  Or, really trying to change it nonetheless.

Lastly, I have to thank each and every one of you that has supported Phantom Harbor since its inception in 2008.  It means so much that you check in to see what we're up to.  So, that said, what is going on?

I'm trying to go legit.  Not that I don't thoroughly enjoy making this little show in my garage, but the economy being what it is, I can't afford a hobby anymore.  That isn't to say that Phantom Harbor is going to go away any time soon.  No.  Far from it.  It just means that in order for me to sustain or exceed the production level I've finally been able to push the show to, I'm going to need some dough-rey-mi, if you know what I'm saying.

I've been authoring a proposal that will, with any luck, be done next week and in the hands of some folks who might be able to put it in front of folks, who know folks who might be interested in coming on board to help get this darned thing made.  I'll be honest.  It is my last roll of the dice in this arena.  If this doesn't make its mark, then I guess I really don't get it.

Will that be bad?  Nah.  It just means that Phantom Harbor will remain what it has been for the past 4 years, and that hasn't been bad at all.  But wouldn't it be fun if it did hit?  I'd like to think so.

In the spirit of accepting help, here's a request of you:  This Thanksgiving, when you're gathered with your family around whatever size table you're sitting at, around whatever size meal you're about to eat, and someone says, "Let's say grace," sneak a little prayer for a Christmas miracle for Phantom Harbor.  I couldn't thank you enough for that.

Shannon Shea
Posted by Phantom Harbor at 12:52 AM No comments:

Why I've Been Silent for the Past Week

So, for the past week things fell silent at Phantom Harbor, mainly because I spent that time at the University of Virginia.  I had been invited by the Stan Winston School of Character Arts to participate in a three day workshop called "The Art of the Moving Creature."  I accompanied Matt Winston, SWSCA creative director/photographer John Ales, and my good friend, colleague, and incredible fabricator, Ted Haines.

Earlier this year, the 25 students from the Architecture, Fine Arts, and Drama Departments made prototype creatures out of plastic bags and chicken wire in preparation of building giant puppets for a "Monster Parade" in April of 2013!  This leg of the trip the objective was simple...challenging, but simple...Create a "finished" creature, based on one of the students designs, and have it camera ready in only three days.

After reviewing all of the students' designs, we settled on a centipede-type creature they called "Leggy-Breed".  Yes, we all knew that creating a 30 foot long, 15 foot tall creature would be nearly impossible for a three day build, but we also saw the potential of teaching the students how to fabricate sections that they could replicate after our workshop.  A plan was put into place, materials were purchased and the SWSCA representatives soon found themselves on a plane heading to Virginia.

During the flight, Ted and I had a heart-to-heart about what we thought we could ACTUALLY accomplish in such a short amount of time. If we got a head, body section and one pair of legs, we felt that we would have done our jobs and we'd put the students on a path that they could continue in our absence.  Boy, did we underestimate these students.

The traveling to and from Virginia could be a blog post in itself, but let us just cut to the chase.  The faculty, led by Steven Warner (Drama Dept.), Melissa Goldman (Architecture Dept.) and Eric Schmidt (Fine Arts Dept.) joined the 25 hand-picked students in the realization of the goal.  I could attempt to describe every incredible day, but I'll let the pictures speak for themselves:
You can see the creature in action as it was featured in a local newscast here!

The bottom line is that I was VERY impressed with this group.  They did a heck of a job in what turned out to be about 2 1/2 days of building.  We instructors left them confidently; they know what they have to do to make the remainder of the creatures for their parade and they know it will only happen if they remain the well-oiled machine they were this past week.  I hope I can get back there next April to witness the spectacle in person.  I couldn't be prouder of them all.

Shannon Shea
Posted by Phantom Harbor at 1:51 AM 2 comments:

So, here we are in the wake of another Halloween and I, for one, thought it was very rewarding.
True, I didn't put up about 40% of my outdoor decorations and my indoor decorations were only up for about 10 days (usually, I try to put them up October 1st so I can enjoy 31 days of creepy decor).  Also, I know our friends and families on the East Coast had a lot to deal with because of Hurricane Sandy and, trust me, my heart goes out to all of them.  Having grown up in Louisiana, I am NO stranger to hurricanes, and now living in Los Angeles, I'm ever-wary of Earthqu- well, you know whats!

Halloween fell on a Wednesday, and I'm sure lots of working parents just couldn't get home, or rouse themselves to walking the neighborhood with their kids as evidenced by much less Trick-or-Treaters than in the past.  It was a weird night.  And, it didn't take a genius to see more political signage on front lawns than pumpkins in surrounding areas, but in spite of all that - Halloween was a success. 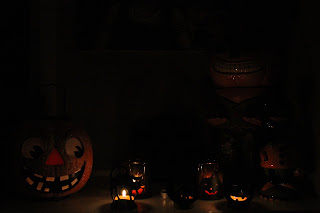 For those kids who did come by, they had a brief encounter with the weird!  The combination of my home-made mask and home made tentacles really shocked the heck out of most of the folks and kids who came by. I have two encounters I must share.

My daughter, Molly, showed up a bit later in the evening, dressed as a Widow in Black, carrying three decapitated heads.  She sat on the front steps while I greeted the kids.  One little girl, she had to have been about 8 years old, stepped up and said, "I'm not afraid of ANYTHING!" I replied, "Oh, really?" and hit the button in my sleeve that shot three black tentacles out of my other sleeve.  She shrieked and then laughed. 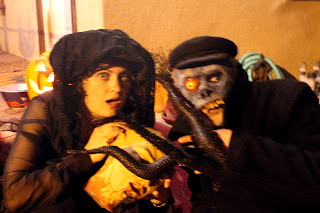 Another three girls approached me and said, "You look funny." "Is THIS funny?!" I asked while launching the tentacles from my sleeve.  Their response was like something out of a movie.  All three girls stood, paralyzed, screaming at the top of their lungs!  They screamed so loudly, that my wife, Tracy, came out to see if everything was alright.  Again, they all broke down and laughed afterward.  See, to me that's what Halloween is all about.

I can recall at least a half a dozen incidents that occurred when I was a kid, when someone in Gretna, Louisiana went the extra distance.  One way or the other, they had created an atmosphere, or a yard haunt that forever stuck in my psyche.  You know, when I REALLY think about it, I believe that it has been Halloween more than movies and television that affected me and inspired me to make monsters for a living.

At one point, during a calm between gaggles of families, I sat by myself on the step, butt freezing, tethered to an air hose, only able to see clearly out of one eye, holding a bowl of candy in my lap and I thought: I'm fifty years-old.  But I realized I didn't feel stupid, or like I was wasting my time.  Oh ,no.  I may have been fifty that night, but I felt about 12 years-old;  I was a prankster - a TRICKSTER - and the kids and their parents were loving it.

Today, as I took all of the decorations down, I didn't feel any remorse.  Halloween 2012 had been good.  I know, that for some of the kids in my neighborhood, they'll grow up always remembering the night they met the creepy guy with the tentacles in his arm.  Who knows, maybe they'll grow up thinking of ways to scare the kids in their neighborhoods.  I hope so.  Like I said, I think that's what Halloween is all about.  Passing the torch to new generations of people who will go the extra mile to scare the heck out of kids!

You can get a taste of what it was like here: The Cap'n field tests his Halloween Mask