Just wanted to show that, as promised, I'm cooling the "Lone Wolf" act and asking some of my very talented friends to lend a hand with Phantom Harbor!

I've been putting a proposal together, and I thought that what would really spiff it up was a cool caricatured cover by none other than the "King of Caricatures" Mark Tavares!  Well, it really paid off!  Mark sent this to me late last week: 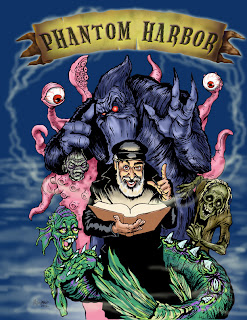 Okay, it is the low-rez version but you really get a sense of its magnificence when you click on it!

So, I have to say, in this public forum, "Thanks Mark!" It is really cool!  Love it!